A Place in History, 50 more East Anglian moments in time by Peter Sargent
Ink in my Blood - My half century in newspapers by Neil Haverson

A Moment in Time by Peter Sargent 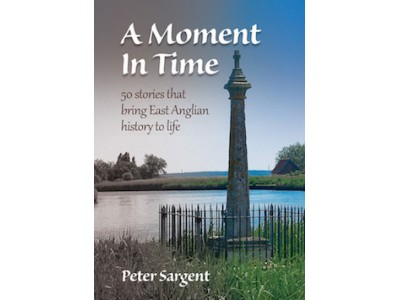 It only takes a moment to change the world. Our past is littered with these moments; from the grandest in the land – a Queen claiming her crown at a Suffolk castle - to the humblest – a workman whitewashing religious pictures in a church. These moments in time helped create our history in East Anglia. In this book, former journalist Peter Sargent takes us on a journey in time, from the mysterious ancient figure of the Green Man in Norwich Cathedral, via the day King Charles II rode a winner at Newmarket’s racetrack on to Second World War soldiers preparing for the D-Day landings in woods on the Norfolk-Suffolk border.

In this series of short stories, many of which first appeared in the Eastern Daily Press newspaper, encounter famous figures who made their mark on the eastern counties. Here is Oliver Cromwell raising an army, Queen Elizabeth I making a Royal Progress, while her sister Mary plays a game of thrones, highwayman Dick Turpin goes about his nefarious business and Norfolk squire and Britain’s first Prime Minister, Robert Walpole, saves the country from financial ruin.

Peter Sargent’s interest in history was sparked when he studied the subject at the University of East Anglia, Norwich, during the 1980s. From 2004-11 he wrote weekly articles on local history which appeared in the Eastern Daily Press, and was production editor on Let’s Talk magazine for six years.

"From Norfolk's bare knuckle boxers to the sailors who fought a huge sea battle off the Suffolk coast, Peter Sargent has gathered together 50 stories from our past for a brilliant new book...A Moment in Time is a book that readers will want to dip into time and again to discover and rediscover the people and places that have helped shape our story."

Shipping is Free to the UK. For Shipping Costs to other Countries please click on the ask the question button to contact Paul Dickson Books