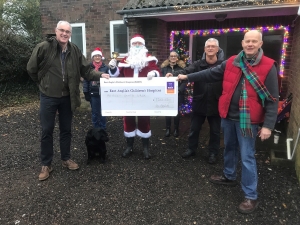 Over 100 residents of Brisley and surrounding areas managed to take part in a Santa walk earlier this month, with the organisers working hard to make sure they could help East Anglia’s Children’s Hospices (EACH) during a time the charity has never needed more support.

Brisley’s village hall committee were behind the fundraising effort, supported by a generous grant previously received from the Norfolk Community Foundation, and ensured the event complied with all relevant regulations, and kept participants safe. Those who took part walked a signed course before receiving a certificate and gift from Father Christmas. Outside the village hall, they were able to enjoy mince pies, hot sausage rolls, mulled wine and festive music by the Fakenham Ukes. Great care and creativity meant stalls offered seasonal games, without the need to handle anything.

Ian Edwards, one of the organisers, said: “There were many highlights, but perhaps the most magical sight was when we were joined by two miniature donkeys dressed in Santa hats and Christmas jumpers. It was a lovely community event and raised over £720 for EACH. We hope this will become an annual event in the Brisley village hall calendar. Thank you to everyone who helped to organise or support in any way.”