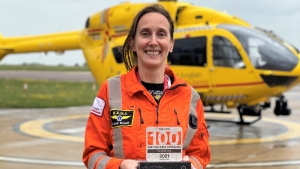 East Anglian Air Ambulance (EAAA) has been awarded the top spot in this year’s Best Companies list for the Charity Sector for its exceptional employee engagement and support during the pandemic.

These national awards are based on the results of an employee feedback and engagement survey which feeds into regional, national and sector league tables. These fantastic results recognise the charity’s long-standing commitment to creating a fantastic place of work to support the life-saving organisation’s number one priority: delivering an excellent service for its patients. And that the organisation went above and beyond during the pandemic to support its staff, keep people connected and promote well-being. 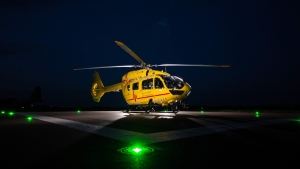 East Anglian Air Ambulance (EAAA) and its aviation partner Babcock have announced a significant new multi-year contract to keep the helicopter emergency medical service flying high and saving lives 24/7 into the next decade.

EAAA has two state-of-the-art helicopters covering the region, one based in Norwich and one in Cambridge, which are currently supplied by Babcock. The new contract crucially covers the introduction of 24/7 flying and follows a detailed examination by the charity of all potential UK helicopter operators, in order to find the right partnership to deliver the service into the future.

Babcock will continue as EAAA’s exclusive aviation partner for at least the next seven years, providing EAAA with advanced helicopters, ground support, engineering and pilots.

Matthew Jones, Director of Operations at EAAA, said: “In the 10 years we have partnered with Babcock we have been impressed with their commitment to safe and increasingly effective air ambulance operations. This new contract means we can continue to work together to deliver, and improve, the critical emergency response we are proud to offer to the people of East Anglia." 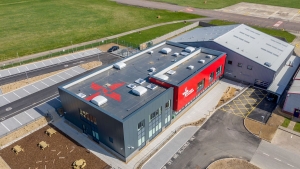 Life-saving crews from East Anglian Air Ambulance (EAAA) have moved into their new Norwich headquarters, ahead of planned 24/7 operations later this summer.

The charity, which has been operating from temporary accommodation for over a year, launched its mission to deliver a 24/7 air ambulance service in the East of England back in 2019. This week, despite delays due to the pandemic, that goal is one step closer as its life-saving crews have moved into the charity’s newly built 24/7 operating base at Norwich Airport.

The Anglia One helicopter team will start flying 24/7 from the base in late June, after a short settling-in period.

Funded through generous gifts in Wills, the £7 million development will enable the charity to finally have the training, rest and welfare facilities required for a fully 24/7 helicopter operation and will make EAAA the first air ambulance in the East of England to fly round the clock.

By flying 24/7 the charity estimates it could be tasked by helicopter up to 600 more times a year, delivering critical care to those in need faster at night and closing the five-and-a-half-hour gap where there is currently no helicopter coverage in the region (between 1:30am and 7:00am).

Were you the first EAAA patient? 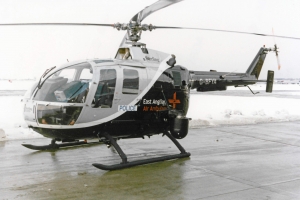 20 years ago on 9 February, East Anglian Air Ambulance flew its very first official mission, to help someone in Norfolk in a serious condition.

At this point, the charity, which was set up a few months earlier, in September 2000, only had enough funds to fly once a week, and did so on a Friday.

The helicopter was a black Bolkow 105, built in 1977, and was also used as a police helicopter. The crew was a single pilot and two paramedics, different to the double pilot and doctor and critical care paramedic teams who operate today.

Records show the first flight was at 16:00pm on Friday 9 February, with a total flight time of 25 mins, covering the flight to the incident scene and back again. The crew were back on base by 16:55pm, which indicates that on the very first mission the patient was not transferred to hospital in the air ambulance, but help was provided on-scene. 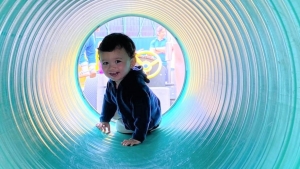 East Anglian Air Ambulance is sharing a story about a one-year-old child who suffered serious burns whilst on holiday in Norfolk, to raise awareness for the charity and its Virtual Gifts Chrsitmas appeal.

In July, the Day family, from North London, were enjoying a summer break at Fritton Lake, near Great Yarmouth. Dad Chris, mum Bailyn and one-year-old Charlie were getting ready to leave the lodge, packing up for the trip ahead. Unfortunately, as lunch was being prepared, Charlie excitedly burst into the kitchen. Within seconds, he had reached up onto the kitchen counter and pulled a pan of boiling hot water all over his chest, torso and face, causing him to scream out instantly in incredible pain.

Charlie’s parents rushed him into the shower to try and cool the burns down as quickly as possible and dialled 999. An ambulance was dispatched whilst Charlie’s family tried to follow the advice of the call handler, but his condition wasn’t getting any better and the situation was escalating quickly. Recognising that Charlie would most likely need specialist treatment, the Anglia One team from Norwich was also dispatched.

East Anglian Air Ambulance (EAAA) has revealed that despite a challenging year, plans to start flying 24/7 from its new Norwich headquarters are on track for 2021.

This week, the charity’s Chief Executive Patrick Peal visited the site of EAAA’s new 24/7 base at Norwich Airport to mark the end of exterior building works, which have been delayed by 16 weeks due to the pandemic.

The £7 million base project was started in January of this year and was originally planned to be finished by the end of 2020. The new base is a key development in enabling the charity to start flying 24/7, from a state of the art purpose-built facility, with improved rest and welfare facilities for the crew.

The funds for the base were ringfenced from years of generous gifts in Wills and committed before the Covid-19 pandemic hit.

20 years ago, on 6 September 2000, a new charity was formed to help save lives across East Anglia: the East Anglian Air Ambulance (EAAA). Operating initially just one day a week, on a Friday from Norwich Airport, with one paramedic, this was the start of an important lifeline for many local people.

Monday, the start of National Air Ambulance Week, EAAA can reveal that over the last 20 years it has flown almost 30,000 missions and helped almost 20,000 patients, all thanks to the generosity of local people.

At a time of so much uncertainty, the charity, which needs to raise £13 million a year to develop and deliver its service, and is aiming to start flying 24/7 for the first time next year, is deeply grateful for the public support which has enable it to pass this milestone.

Air ambulance call on Norfolk to help them run 2,000 miles next month 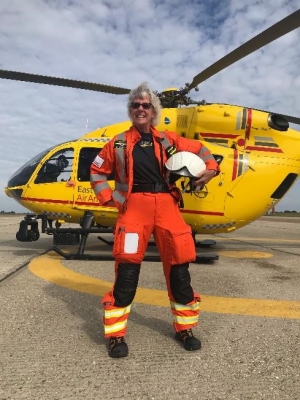 Together We Run is a new fundraising challenge from East Anglian Air Ambulance (EAAA) which is encouraging local people to pledge their miles towards a collective 2,000 mile target.

EAAA normally organises several mass participation challenge events throughout the year, raising hundreds of thousands of pounds to help keep its yellow helicopters flying and saving lives. These events cannot go ahead this year, so the charity is asking its supporters to take part in Together We Run instead, a virtual fundraising challenge from 14 – 20 September, to run (or walk) a combined 2,000 miles, wherever and whenever suits them.

If successful, this virtual running event could become a regular addition to the charity’s event calendar, along with its Only the Brave muddy obstacle run and Trek 24 walking challenges.

The small team at Black Shuck Gin, based in Fakenham, continue to amaze EAAA with their generosity and kindness.

As well as supporting the charity with a limited edition gin this year and other various fundraising activities, they have spent their time during the lockdown tirelessly working with government authorities to produce a very much needed Alcohol Based Hand Sanitiser.

This has been donated to regional air ambulances, care homes, schools and key workers to help save lives during the pandemic. Black Shuck Gin have made a huge impact on EAAA and on the wider community.

Patrick and Sarah Saunders of Black Shuck Gin said: "We were thrilled, honoured and proud to hear that we had won the Most Inspirational Business Category in the East Anglian Air Ambulance Inspiration Awards. All of the nominees were outstanding and we thoroughly enjoyed reading all of their stories." 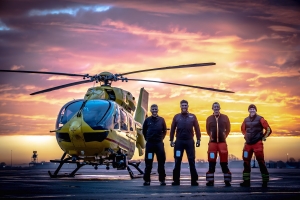 East Anglian Air Ambulance (EAAA) is still flying and saving lives during the Covid-19 pandemic, but the cost of keeping its crews safe has been significant.

The charity has had to quickly adapt its operating procedures and source large amounts of personal protective equipment (PPE) in order to keep its two critical care teams safe and able to support the region’s emergency services. The estimated cost of acquiring the additional PPE now required over a six-month period is over £100,000.

The charity has launched an emergency appeal for donations to help fund the PPE, which is protecting its crews and keeping the air ambulance teams safe.

More than £25,000 of unbudgeted funds has already been spent on items such as respirators, high-protection masks, visors, suits, gowns and goggles to protect the doctors and critical care paramedics who are working in the pre-hospital environment.