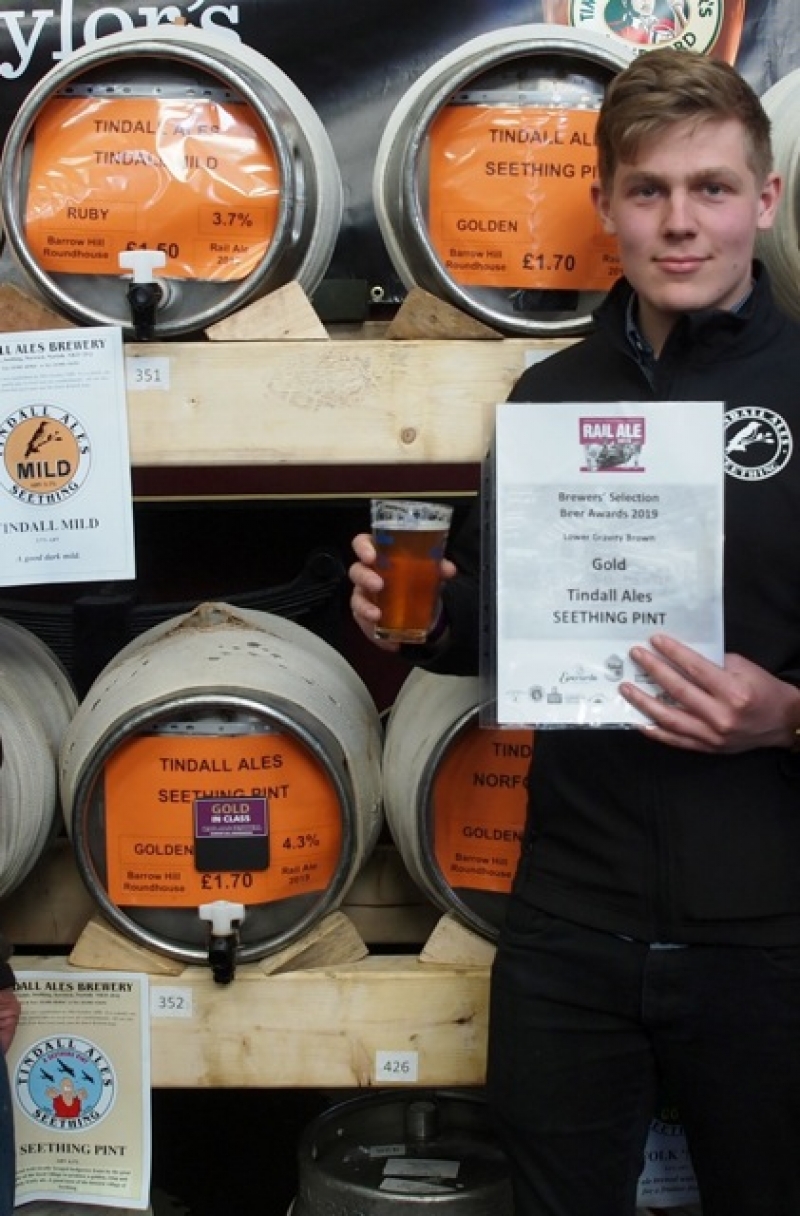 One of the youngest brewery owners in the UK who has already won awards for his beer has seen sales of his real ale hit an all time high during the current crisis.

Mike Green aged 21 who runs the Seething based Tindall Brewery has been working flat out to keep up with the demand for bottles of ale during lockdown.

Once produced his award winning ales are being sold in a takeaway format, and on a non contact basis. He said that ‘the brewery has been thriving, and sales of bottled beer are up tremendously’. He has also been selling fresh draught beer to people who bring their own containers for £3.40 a litre, and casks of beer for people to set up at home.

Mike added that he is also very pleased to think that his ales have helped people to get through these difficult times of isolation, provided comfort and are something for people to look forward to.

It was at the 2019 Norwich Beer Festival that Mike scooped a first place for his Ditchingham Dam in the best bitter category and 3rd place award for his Honey Do ale to add to his first place Brewers choice award from a beer festival in Derbyshire for his Seething Pint ahead of long established breweries including both Greene King and Timothy Taylor’s.

Mike revived the brewery which had originally been founded by his father Allan in the late 90s in a converted stable in Tindall Woods, hence the name of the brewery, and moved it to its present location of the one time home of the 448 th bombing group during World War 2 at Seething airfield.

However after some success himself Allan semi retired from brewing but agreed to pass on many of the skills that he himself had learned to his son who was determined to not only revive the brewery, but to bring it into the 21st century.

While keeping many of the breweries original ales he created a range of new one’s as well including ever more interesting new ingredients that were mostly locally sourced, and has had great success in doing so.

Mike says that he always planned to carry on his father’s legacy creating a quality product, sourcing the best possible ingredients, and supporting the local community. He hopes in the long run when life starts to return to normal that he will be able to expand the business, be able to go beyond the county, and to host tap nights at and tours of the brewery.  However for now in the middle of a crisis which has left him saddened by the terrible effect that it has had upon the nation he has been surprised and delighted by people’s reaction to the companies range of real ales and feels quietly optimistic about the companies future.

To find out more about Tindall ales go to their facebook page at- https://www.facebook.com/tindallales/ or contact Mike on 07703 379116. More in this category: « New Chapter of Help for Local Children Norwich Market set to re-open »
back to top