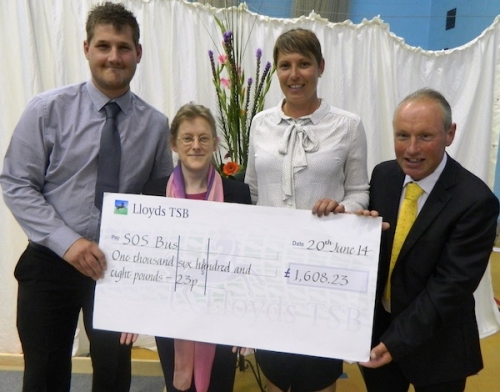 Students from a local college chose a Norwich benevolent cause as their charity of choice in September 2013.

The learners - based at the Norfolk campus of Easton and Otley College – decide to support two charities every year, democratically voting their preferred choices at the annual student conference that takes place at the start of term.

This time around, students decided they wanted to help the Norwich SOS Bus as one of their recipients. (Help for Heroes was the other charity chosen).

As a result of this, the students from across the college raised money by hosting various different fundraisers throughout the year including a 26 mile walk along the Marriott’s Way from Aylsham to Norwich.

The college also donated profits from their annual open event in June and volunteers from the SOS Bus, visited the college at the end of year prize day ceremony to pick up a cheque for £1608.23.

Robert Wisken, volunteer for the SOS Bus said: “We are overwhelmed with the generous donation received from Easton and Otley College.  Donations like this make such a positive difference to us and on behalf of the users of the SOS Bus, we would like to thank all those involved in helping to raise this fantastic sum of money."

College spokesperson, John Nice, said: “We raise thousands of pounds for charities each year as part of the work that we do in the community and we were delighted to be able to raise cash for such a great local cause.”

The Norwich Bus SOS provides a safe haven for people to attend at times of need. Through this they offer first aid, advice and many other types of support and from May 2013 to May 2014, the SOS bus has helped look after nearly 700 people.

For more information about the Norwich SOS Bus visit www.sosbus.co.uk More in this category: « PRESMA Mary is ensuring material gain for EACH »
back to top