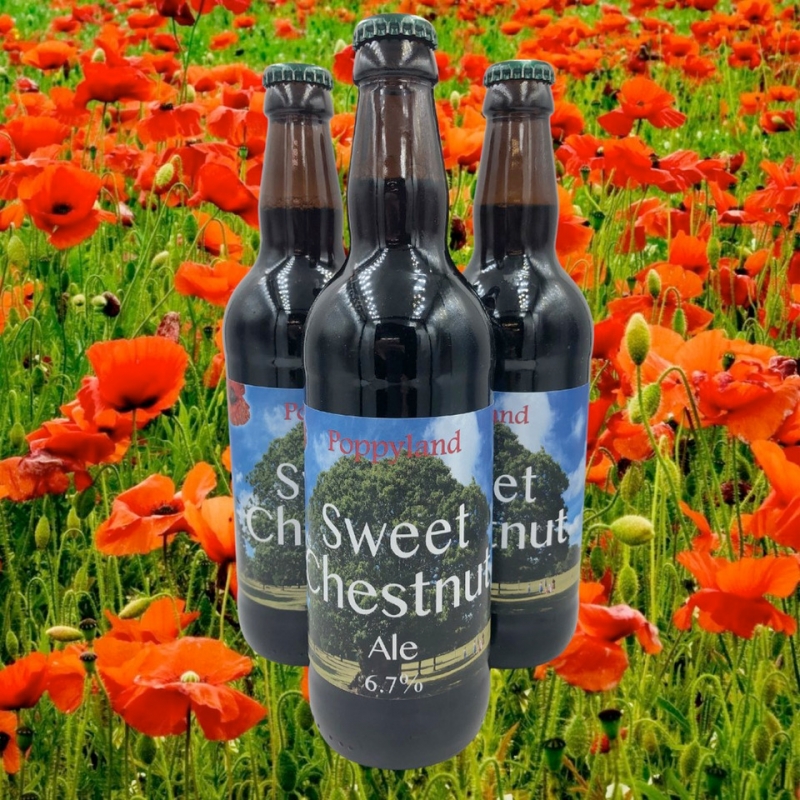 Poppyland Brewery of Cromer, Norfolk has been awarded a silver medal for its Sweet Chestnut Ale in the London Beer Competition 2021.

The 10-year-old brewery, run by owner and brewer Dave Cornell and based in a converted Edwardian motor garage in West Street, Cromer, was competing against rivals from around the world, including Belgium, Germany, the Netherlands, Australia, the United States and China, as well as the UK.

Sweet Chestnut Ale, which is made with chestnut flour as one of the ingredients, is a smooth 6.7 per cent abv dark amber ale, rich, warming, and with a beautiful smack of chestnuts on the nose and in the mouth and a slightly dry finish. A highly satisfying beer on its own, it matches very well with dishes such as roast pork, steak, stir-fries and curries.

Its silver medal came in the “speciality beers” section of the competition, where it won alongside breweries from Switzerland, Hungary, Austria and Australia. Poppyland is believed to be the only brewery from Norfolk to win a medal in the 2021 London Beer Competition.

Dave Cornell, who has run Poppyland since 2019, said: “I'm delighted to have picked up a silver medal in our first year of entering the London Beer Competition. The policy at the brewery since it was founded by Martin Warren in 2011 has been to make interesting and unusual brews, and we're very happy that the judges have recognised and awarded our efforts.”

The London Beer Competition judges beers not just on their taste, but also on their value for money and the appearance of the packaging. Judges include brewers, beer sommeliers and beer writers. Sid Patel, founder of the London Beer Competition and chief executive of the Beverage Trade Network, which organises the event, now in its fifth edition, said: “To be an award winner you will need to have a top-quality beer, that offers both the trade and the consumer great value for money, and you will need to look good and truly stand out on the shelf and on the back bar.

“All the winners in the London Beer Competition will give trade beer buyers, be they for a supermarket, specialist beer retailer, casual dining or upmarket restaurant, the reassurance that these are beers that their customers want to buy.”

Sweet Chestnut Ale is available in 500ml bottles from selected retailers or from the brewery at 46 West Street Cromer – check here for opening hours: www.poppylandbrewery.com/contact-us/ – or contact Dave Cornell at This email address is being protected from spambots. You need JavaScript enabled to view it. or on 07802 160558.

"Poppyland" was the name given to the North Norfolk coast by the Victorian journalist and writer Clement Scott, popularising it as a holiday destination. Poppies still grow extensively in Norfolk's barley fields, which produce what is widely recognised as the best malting barley in the world.

FlexiMed Training Ltd (Gt Yarmouth)
We offer a range of First Aid training and healthcare courses at your workplace/venue as well as at one of our open courses, throughout Norfolk and our training room in Great Yarmouth. We believe that First Aid training should be ...
Explore

Sirius Training & Certifications Ltd
STC is proud to be recognized as a BRC ATP (approved training partner) and also an approved Highfield Training Centre.STC is a BRC Approved Training Partner, we also deliver Highfield Food Safety & Train the Trainer training courses, all in a ...
Explore Original Art Photography
Become a better photographer faster with expert tuition from an international award-winning professional. Getting started taking photos can be easy. But some can find improving difficult with confusion over the camera controls, fear of Photoshop ...
Explore

Fido's Pet Bazaar
Fidos Pet Bazaar is a double award winning Pet Shop started by Alan and Lorna Raven in 1977 and still going strong. We are a large authentic pet shop combining the best of the old with the best of the new and an alternative to boring old pet ...
Explore

More in this category: « Jessie's Country Crafts reopens on 12th April North Norfolk gin makers in finals of prestigious competition »
back to top